Cast iron skillets are coming back into vogue. More and more people are concerned about preserving our natural resources, their carbon footprint, downsizing and the ever increasing environmental toxins that lead to a decrease in our quality of life. These pieces are valued for so many reasons but primarily for their cooking properties many of which I will discuss in this article, but first some fun historical facts. 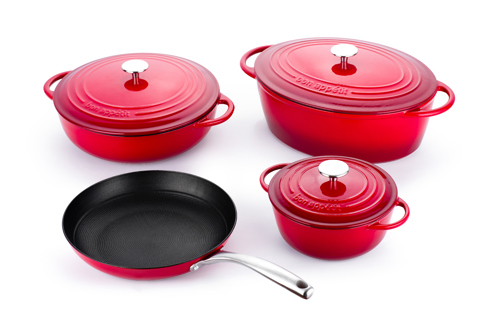 For hundreds of years cast iron skillets have been used and handed down for generations. These skillets are treasured not only for their ability to retain heat evenly but also for their durability. These pieces were especially popular during the first half of the twentieth century. Prior to the advent of stoves and ovens these same cast iron pieces were used in meal preparation directly on the iron cast cookware. hearth or fireplace and right to the table.

Iron cast cookware fell out of favor in the 1960’s and 1970’s as Teflon-coated and non-stick light weight and colorful cookware was introduced to the public. Most of the iron cast cookware manufacturers that began production in the late 1800’s and early 1900’s, like Griswold and Wagner, are no longer in existence and have been acquired by other corporations and no longer produce iron cast cookware in the United States with the exception of Lodge Manufacturing.

Cast iron cookware is so highly favored for its versatility. Just one properly selected piece can accomplish a multitude of jobs thus saving both money and space. One properly selected piece can easily prepare golden brown corn bread, cakes, pies, biscuits, roasts, fried chicken chicken, fried potatoes, poached eggs, vegetable stir fries, crepes, omlettes, perfectly sautéed anything, seafood, fabulously seared steaks and the list goes on. Cast skillets can be used either on the stovetop or in the oven. You can even take it camping with you; it’s perfect on an open fire or on a grill.

Contrary to popular belief, a cast iron skillet is naturally non-stick. It’s ironic that one of the reasons this type of cookware fell out of favor was due to the advent of non-stick cookware, but a properly seasoned cast iron item is non-stick! The older these pieces become the better they get. Truth be told, how many of you still have your so called non stick cookware from 20 years ago? 10 years ago? 5 years ago? You get the picture. You have probably replaced them more than a time or two (dozen!). But the iron cast skillet can remain in your possession and non-stick for literally hundreds of years.

As teflon coated cookware breaks down the surface becomes increasingly more dangerous leaching toxic chemicals into our food which we then later ingest. And aluminum cookware isn’t much safer. But not cast iron cookware. Not only do these skillets not break down into something potentially harmful but they leach small amounts of iron into the food, a few milligrams per dish. Doctors recommend cooking in cast iron cookware in order to naturally add iron to their anemic or iron deficient patients.

The benefits of cast iron cookware are numerous. These quality versatile pieces have withstood the test of time and proven themselves to be durable, a great value for your hard earned money and conveniently simple as it can serve one well in several different capacities in both the oven and on the stove top. Not only will they improve the quality of your end result it can also improve your health. The next time you are considering a new skillet, consider a new or used cast iron skillet. Simply put, cast iron cookware is the best all around cookware.